Home » Blog » The future of eCommerce in South East Asia

The future of eCommerce in South East Asia There are 11 Southeast Asian countries, out of which 6 countries have most of the internet users.

ASEAN countries make the third-largest population in the world out of which millions of people already shopping online. As per the reports, eCommerce spends in the region in 2018 was 50 billion US dollars.

And around 3% of the region’s gross domestic product (GDP) depends on the internet economy and will rise to 8% by 2025, according to Google and Temasek reports. With the increase in internet connection users, many new and established eCommerce retailers are garnering profits and with time it seems to grab the online market even more.

But certain hurdles affect the evolution of eCommerce in ASEAN countries. Let’s check some of the challenges faced by Southeast Asian countries.

Indonesia has the highest population among Southeast Asian countries with most of the people settled across 6000 islands. Similarly, is the case with the Philippines.

Delivery of the parcels gets difficult in these archipelago countries as it takes time and various resources to reach the location.

Apart from this, even if the parcel reaches the island somehow, the delivery to an individual gets difficult due to poor connectivity or infrastructure.

Not only archipelago but the mountainous region and dense jungles of countries like Thailand and Vietnam rise issues for eCommerce companies and logistics partners.

Most of the population of Southeast Asia still dwell in rural areas and less than half living in the city.

Although the internet is accessible throughout the country, the challenges that eCommerce companies face are that they find it difficult in delivering the products to rural areas due to lack of detailed addresses which results in late delivery.

The situation is different for Singapore because most of the population lives near the city and finds it easy to shop from a physical store rather than waiting for the parcel. Therefore, brands need a proper marketing strategy before setting up their online store.

Although the report suggests the growth in internet connection, still most of the population do not own mobile devices.

Most of the people residing in ASEAN countries are not comfortable with a credit card or online payment. Meanwhile, most shoppers do not own a credit card.

The government has taken care of data protection, but lack of information and public awareness prevents them to pay online.

However, this is not a serious challenge as most of the eCommerce companies offer to pay on delivery. Indeed, with time, people will get adopted to payment gateways as well.

There are some more challenges like distinct culture and fashion trends, poor electricity, and lack of information. While ASEAN’s eCommerce sectors lag far behind the rest of the world, but there is still scope of development.

If the number of people in South East Asia is turning to e-commerce every year for their shopping, this shows that there is a lot of potentials for eCommerce entrepreneurs to get expand since the demand is high and that estimations are positive regarding the market growth.

The amount of time people spending online has increased giving more opportunities to the brands to advertise their products online. 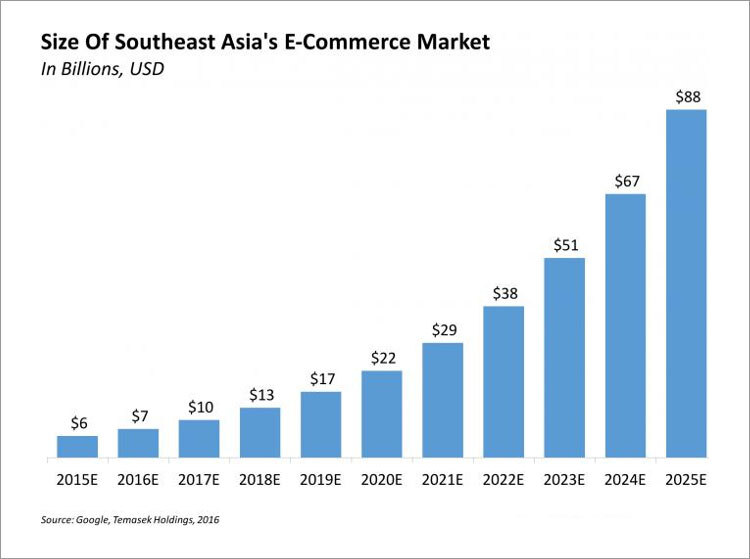 ASEAN is one of the world’s most mobile-centric region. Smartphones are more affordable and accessible making it the primary device for people to connect to the web.

So, to capture potential customers, sellers need to have a robust website and app for easy browsing experience.

With the rise in consumer’s expectations, the eCommerce industry is constantly updating its product and brand life with optimum use of technology.

Consumers in Indonesia and Thailand are still skeptical to pay through the card so, it is important to give easy payment options like cash on delivery, bank transfer, and mobile wallets. The major eCommerce platforms have tied up with regional banks to eliminate the payment issue.

The Southeast Asian eCommerce market has created easy and simple choices for the users. They are constantly monitoring customer’s behavior and managing product offers, hence making them the major player of the eCommerce industry in Southeast Asia.

The eCommerce industry of Southeast Asia is successfully overcoming the challenges leaving enough room for development and as per various reports and statistics, it will soon be the most preferred choice of shopping.

Why PIM is the future of eCommerce and Omnichannel

All you need to know about product selling restrictions on Amazon!